On Monday 13/9/10, I take the Welsh Dragon Express to the big smoke to see some galleries. At this moment im going to Sally Mann at the photographer’s gallery. Edward Maybridge at Tate Britain. Im also going to Tate Modern to see Exposed. I’m sure we will find some other things to visit

First of all i didn’t get to the photographer’s gallery as it was closed on a monday .So sadly i missed out on seeing sally Mann’s work. however i made up for it with the other things that i saw while in London.

The artist statement on the wall read ” Exposed asks whether such incisiveness is inherent to the medium itself”? The exhibition starts off when Photography was a new medium. There was two little 5×3 Carbon Print images of Vatican guards been taken as they stood in window, an early example of paparazzi. Horace Engle was a amateur photographer capturing people off guard. The far more documented amateur Paul Martins work was very interesting capture a Victorian Britain at play on the seaside. The people unaware to his presence. The foundations where set for a whole british fascination with photographing the seaside. This type of image for that time will have been used to show. Inner City Britain what is out there with the use of the new train networks. The juxtaposition to this was Lewis Hine’s work in New York of the same period. Capturing a total different dress styles the people in comparison almost look alien. Helen Levitt captured early street life in New York during early 1950s onwards. Her work has an innocence to it that would maybe hard to capture in this day and age. Her images cried out of long warm summers free from any cares.  I didn’t think at the time of viewing these images it really was a cornerstones for the greats to come of the 1960s & 1970s. THis was it landscapes didn’t have to be the only thing you could capture with the camera.Un like paint and canvas. the camera could move a lot faster.

In the next section the quote “photography invented modern celebrity culture” to be where the celebrities are you had to be out and about always ready to capture what was on the street. Harry Callahan was a four runner in this. Spending his time split with morning on the street to afternoons producing his body’s of work. His close up invasive style would soon be the norm breaking a new barriers in pushing what was acceptable. A sketched an image (see Above) of Garry Winogrand and Lee Freelander’s work. Freelander almost immerses himself in the ladies fox coat jacket. The symmetry in the image is a total master class 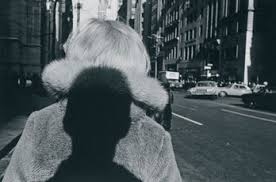 Garry Winograd was the first image half way throughout the exhibition where you could see the reflection of the photographer. This become a major thing in photography books to capture yourself in the image. The image almost had line down the middle of it. In B&W there is something looking like a down and out. THere is a young couple looking up from the lower steps. I think this show the watershed of the young people being aware of the photographer and older disheveled man unaware. A beautiful image, both photographers are master of their discipline for me.

The almost mystical work of Wegee never fails to enchant my imagination the highlight image of the exhibition for me was this one of Marilyn Monroe. The first image by Wegee say a lot about his work on the outside looking in. Where as the second image took at the same time by Gary Winogrand is the more famous of the two images.

The next section of work captures the darker side of the subject. featuring work by Larry Clark cult classic Tulsa. Where Clark follows the actions and goings on of heroin users in New York. He was one of the first photographers to document this subject in such a graphic way. Brassai had a series of 8 images one after the other of a man found dead in the street. The series shows people finding him police arrive the body taken away. THe last image show the street empty back to normal. There was an image of Paris Hilton on being arrested in the back of a police car. I’ll be honest i walked pat the image. I later found out that it was taken by Nick ut who captured the effects of napalm being dropped on a village in Vietnam 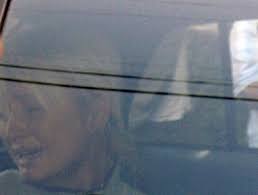 Again these image are challenging what we don’t expect to see. This type of Photography constantly pushes boundaries. sadly I don’t think the image of Hilton will be as iconic in 3o years time if even relevant!

This is shown when looking at mitch epstiens work

again this was a standout image for me. Capturing the actions of a New york couple naked in a bedroom. I thought this was a great homage to Alfred Hitchcock Rear Window.

I think reply to the question at the start of the exhibition. I found the Exhibition very interesting as to see how over just 100 years what is seen a feasible to be captured has evolved. Maybe all the shock has gone from the image.  Photography has to ask the question other than word of mouth how do you capture the split second. Some may say its gone to far with the level that paparazzi has gone to. While there’s demand these pictures will always be taken.

In the above image there pictures of fighter planes.This was work By Fiona Banner. It was so impressive to see such a fine use of the space in the gallery. Tate Britain never fails to not let you down with some really challenging exhibitions. It was brilliant to be able to take photographs of the installation.

I was unsure what to expect from the Edward Muybridge exhibition other than the career defining work he did proving the horse while galloping didn’t have all feet on the floor. THe exhibition was really well laid out. They had a mock up of the measuring device he used to capture info mation through a series of multiple cameras

The area that took me by surprise was his landscape work. It was in the now farmiler yosemite national park. This work was pre Ansel Adams and must have been a massive influence on Adams work.

The images of the half dome mountain by Adams

this was also  taken by Muybridge 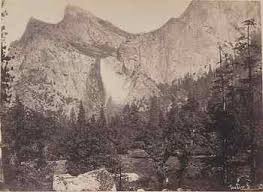 It adds more to how adams captures the location in his own unique style some year later. Muybridge dedication to press on with his pioneering activities was even more so with 360 degree of San francisco bay taken in 1877 which consists of 14 A-3 images

Photofusion is always worth making the trip out of your way to see. It always has some really contemporary photography work. Kurt Tong was the Artist in residence with In case it rains in Heaven. An offering of paper items used in Chinese culture to lost relatives who they say leave with no worldly possessions. The exhibition was great example of why the artist statement is so important. At the end of the photos was a video of all the paper item being set on fire. The point was unclear until i had viewed the reasoning behind the work. As im reading the hand out the inner beauty came striking through. Like I said Photofusion always good as a hidden gem!

Photographs from The New Society @ The V&A

The new society Magazine was around from 1962 and was later bought out by New Statesmen. John Berger the writer of Ways of seeing worked as a writer for the magazine. For the time of the magazine it for me was set out to challenge what british society saw as the norm. The work of Paul Trevor, Chris Steele Perkins Michael Bennett and Martin Parr. The images had in places a touch of humour as seen in Ian Berrys work shows

I was in the past lucky enough to see the Paul trevor archive which is held in the Museum of London. The archive was boxed away in a little room and documented the turbulent times of 25 years on the brick lane area in London. Impeccable was the precision that Trevor worked with. Sadly the images are not seen to have enough relevance as of yet to be worked with into a book. Maybe the subject is to close to the bone with race issues in a time of trying to put the forgotten Great Back into Britain. It was great to see Trevor s Work.

Ill be honest i didn’t get the direction of the  exhibition  by Wolfgang Tillmans. It had a very strong abstract theme running through it. Although each image was impressive in its own merit it was somewhat lost on me. However the big plus for me was the delivery and presentation of the images. I’m really none conformist when it comes to putting photos up. We know why images are put in frames. It what we expect. Apart from tradition where is this rule written. Tillmans really challenges this. Image put on the wall with Sellotape(other Brands are available), Bulldog clips and a wooden table covered with Glass. The images were printed on Per-specs frames, Aluminum prints, Photo Copies, 6×4 images and of course the traditional framed style. I think this shows the value of seeing work in the flesh rather than on a computer screen. Like i say i may not have totally connoted with the content. The delivery has really sparked my imagination…

I am a visual artist and poet who works within the context of fine art. My work is grounded in documentary, exploring the inner beauty of everyday life through various lens based media. Notions of nostalgia and social commentary are present, but from a definite northern working class perspective. Instinctively I exploring the townscapes of North Wales and the North West, often producing work that reflects the every day minutiae of life. View more posts