Father Christmas sent me to London to go around Abbey Rd studios. The never opened space where so many beautiful things have happened from Shirley Bassey The Hollies to Pink Floyd. its kind of weird to describe the space. You have to go in it to get it. if i said when they played the various songs in the talk for instance the Beatles Hey Jude. If you listened closely the notes in the song had the same hushed resonance that the people talking in Studio 2 had. It was a room with people all pulling that bring that minute back expression to over listening e.p’s l.p’s and bootlegs. These images aren’t the best photographs I’ve ever taken as you will see it was a bit packed but like the albums recorded here use your imagination 🙂 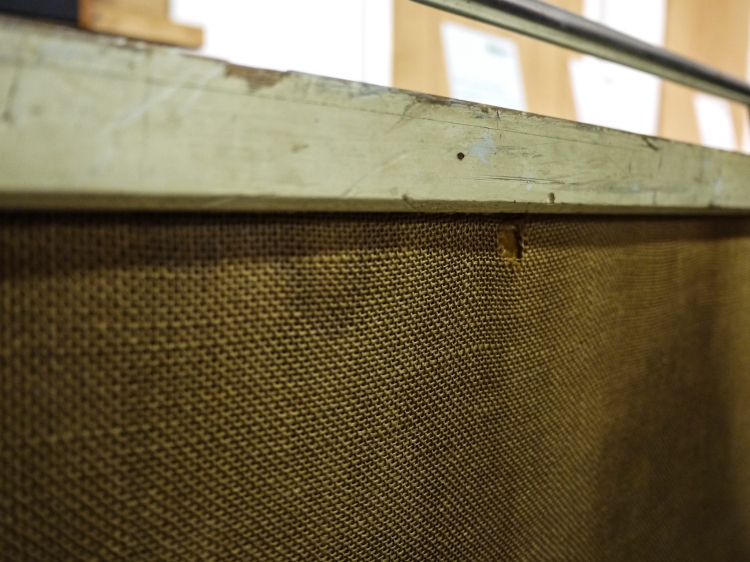 Above is a sound partition that said The Hollies were keen on using. This was the first of many things i stared at longingly trying to extract the memories of magic that had been created in its presence. Tony hicks Graham Nash and Allan Clarke for me nailed the harmonies better than George Harrison John Lennon and Paul McCartney 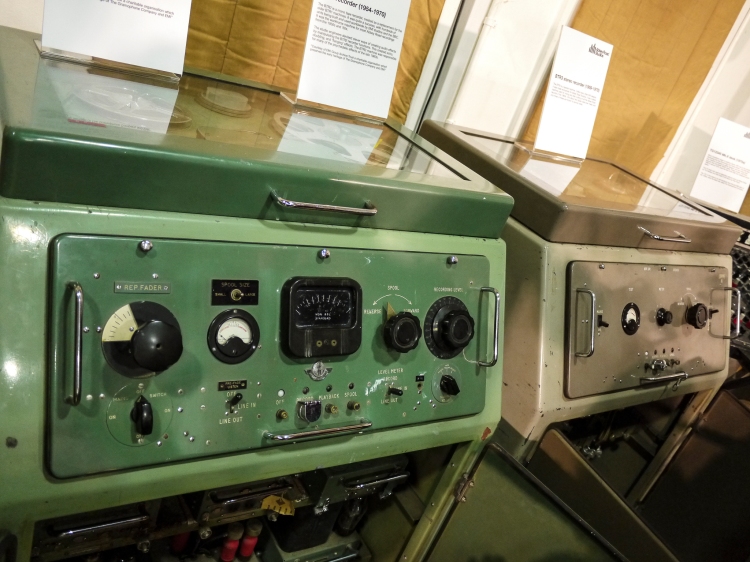 The Mono and Stereo recorders Custom made for EMI and the Abbey Rd Engineers. Abbey Rd made its first recording in 1934 but as with most things the cost was to high and demand was not there. We watched the footage of the 1934 Recording of Stereo panning from left to right on the screen to show movement. 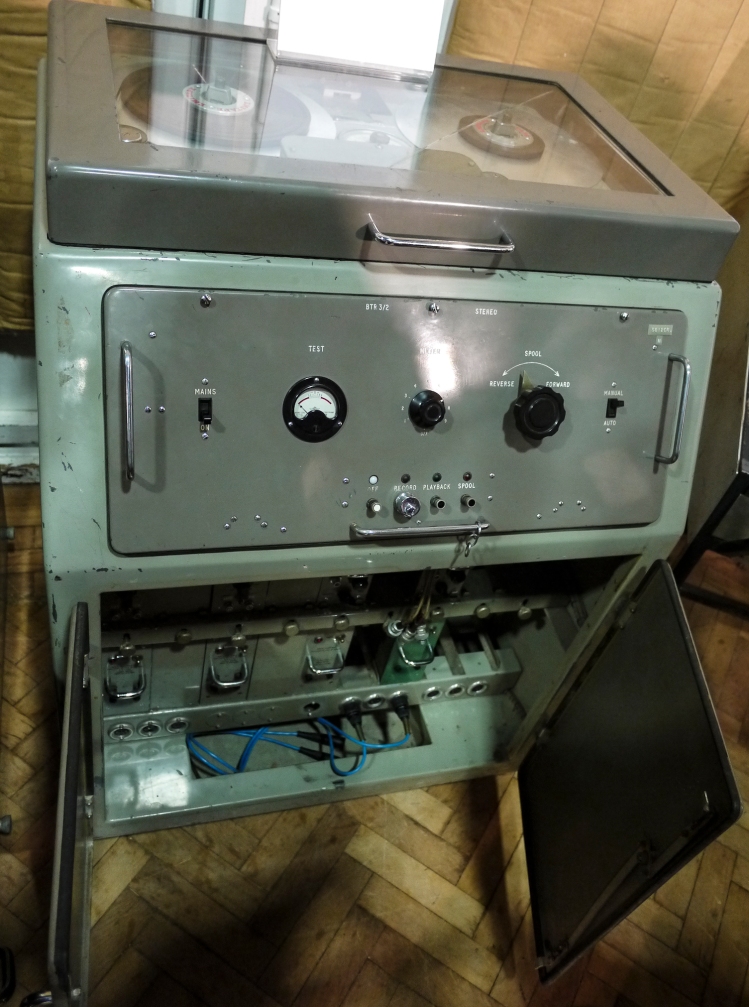 This little beauty changed the way of the musical world with Stereo albums with Help! It was used till the end of the 70s so its got a bit of history. 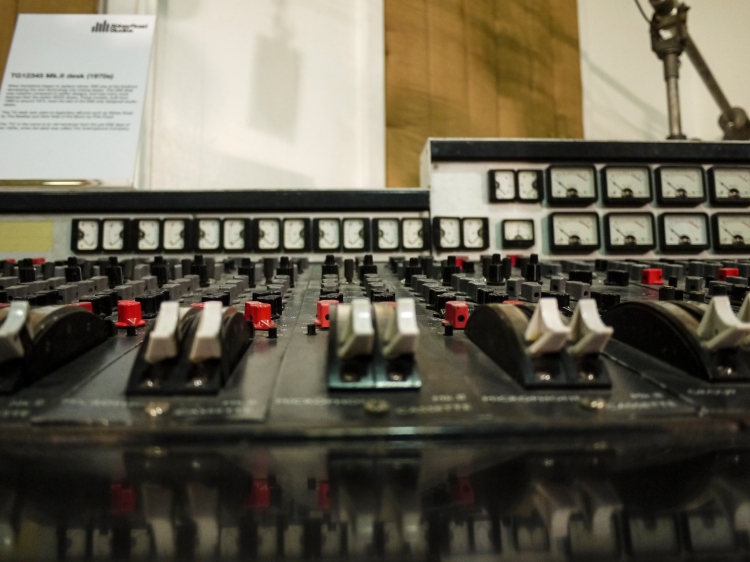 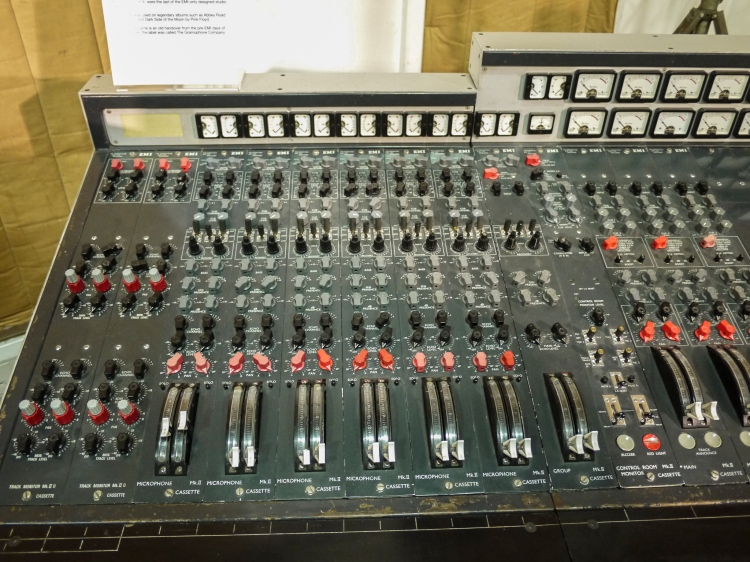 The two above images are the 8 track desks the Dark Side of The Moon was Recorded on. This could be the finest sets of nobs I’ve ever seen! 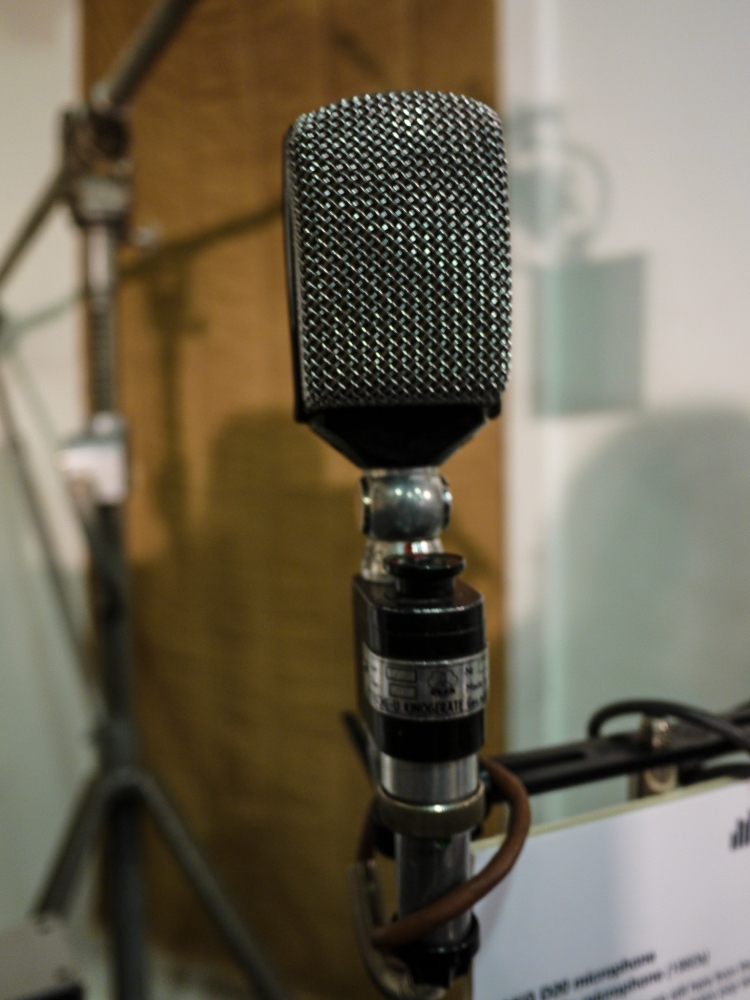 The sound is dampened by these fabric blankets originally filled with dry seaweed but now something less flammable. 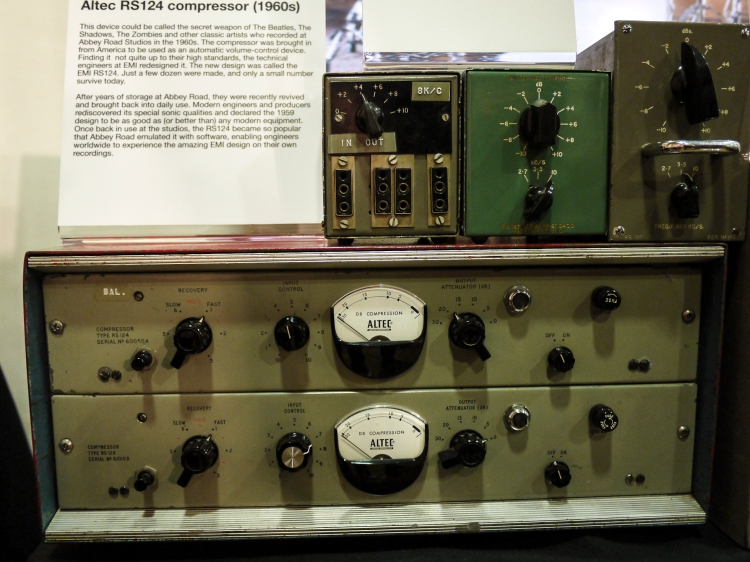 If you look closely you can read the Writing for the Altec Rs124 Compressor. I love the fact that all this stuff is still used today

Strawberry Fields Forever is all i thought about while looking at this. I can say no more… 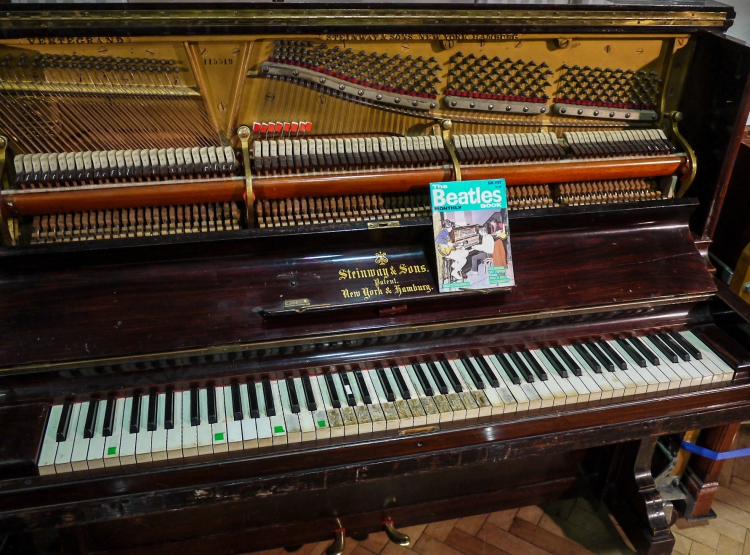 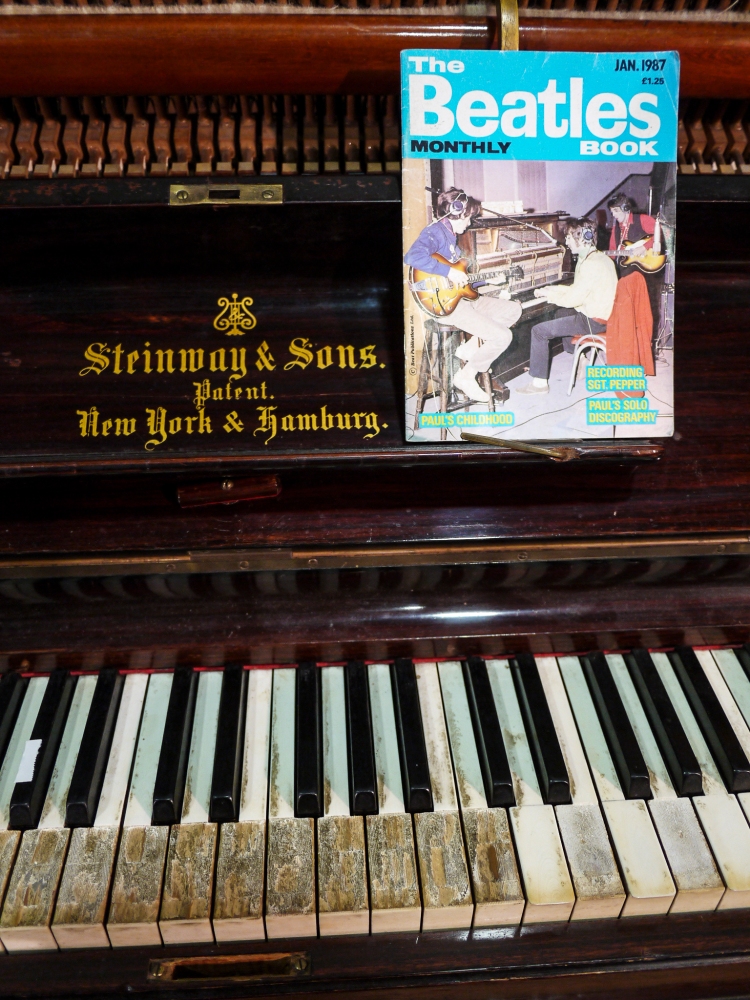 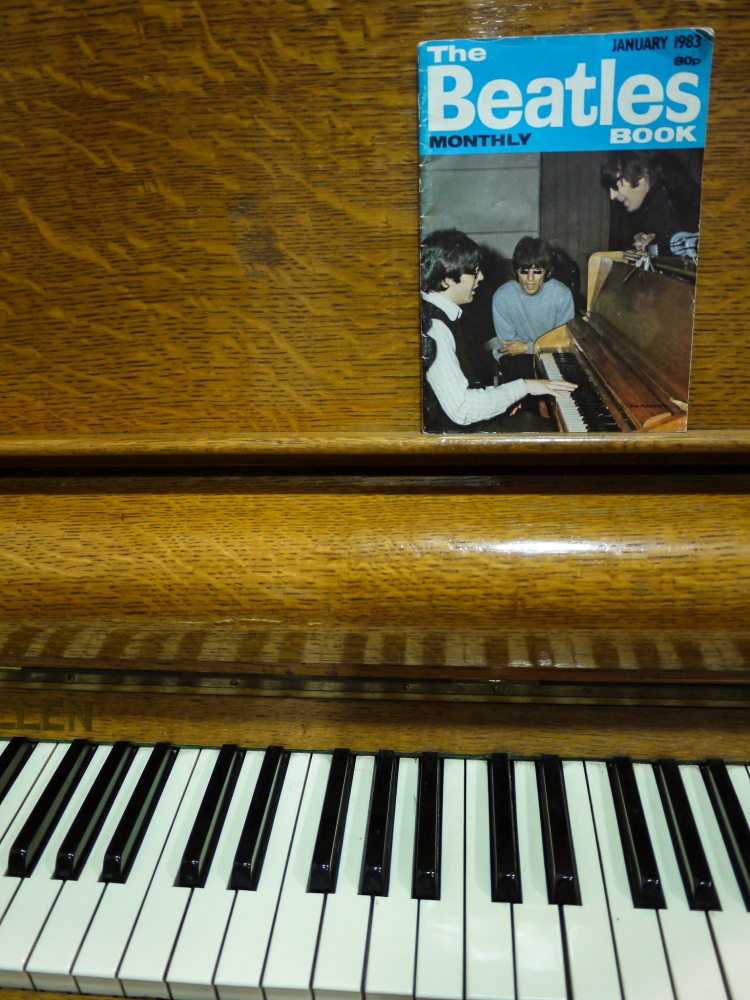 Nowhere Man was recorded on this little beauty which fits in with the above image around 1965 1966. Maybe that is what he was playing? 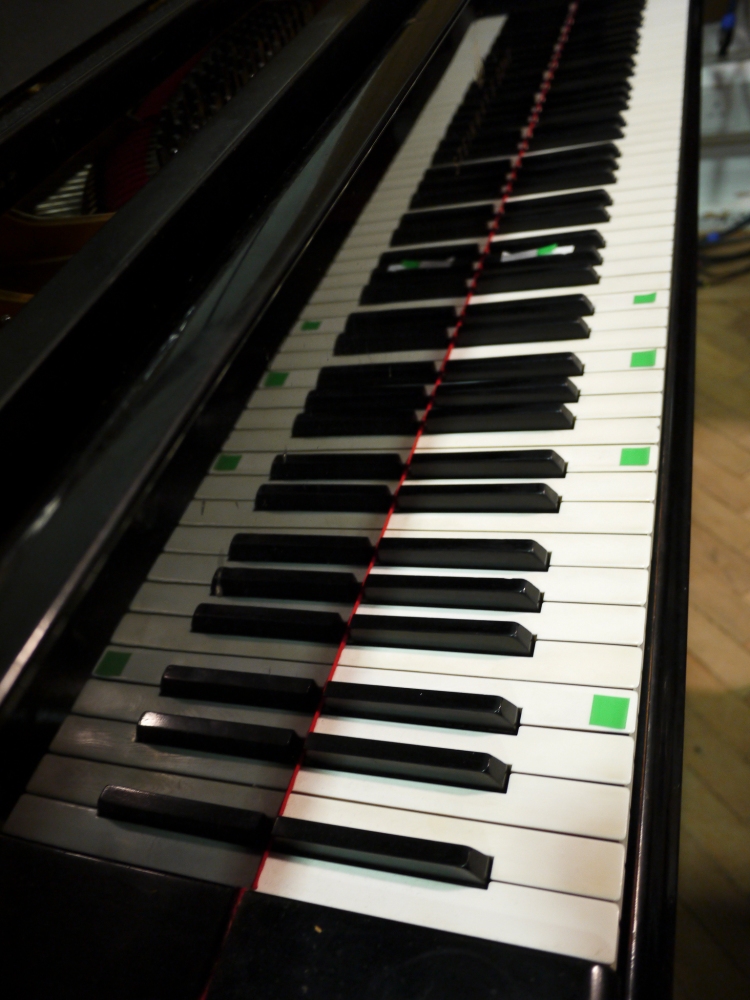 The Above Piano was used for Hey Jude. I’m probably doing the artists a miss service as for what they have been used to record with but it was heavy on The Beatles in the talk. All there pianos were used for the end note on A Day In The Life which they got three people from the crowd to perform. They just let the note resonate after it had struck on the keys. it was like listening to album 🙂

The Celeste was used on Dark Side oF The Moon Track Time for its haunting intro which they also played. Richard Wright so sadly missed

As you can see it was pretty full. this was the only room you could go in as Hall 1 used for Classical music and film scores. Which in the 1980s saved the building which was going to get turned into small recording studios until the scores for Empires strikes back, return of the Jedi and Indiana Jones were recorded in Abbey rd. Also Dave Gilmour recorded Shine On You Crazy Diamond solo in the vast hall 1

They shown footage of Cilla Black over singing a song on this mic that she had Burt Bacharach flown in to compose. The guys doing the talk also made fun of this. I think  Bob Carolgees was doing backing vocals

These are the semi original chairs brought in 1958 for Cliff Richard and The Shadows with metal frames to reduce any creaking so basically any one you see sat in Abbey Rd recording sits on these. I just know I sat on John Lennon’s that he recorded across the universe on 😉 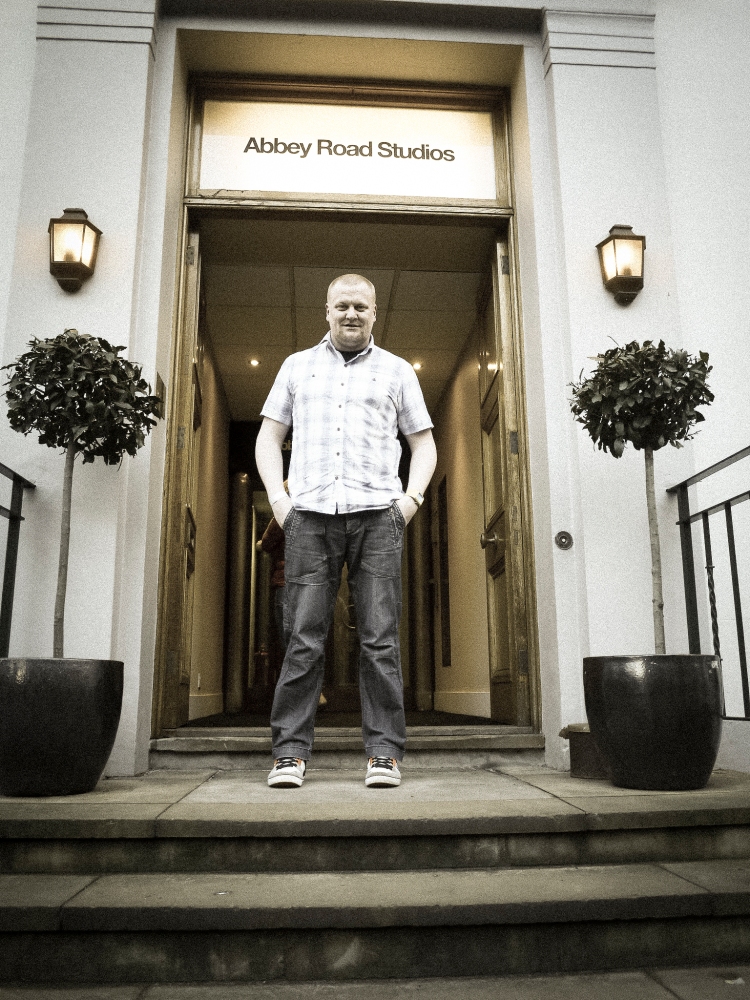 Heres me actually silent for once

I though rather than naffly reacting crossing the zebra crossing outside photo (which sadly they had shown ‘friend of the people’ Margret Thatcher doing) in a video. I worked out which line Lennon had his foot on the album cover. Sad but original 🙂

I am a visual artist and poet who works within the context of fine art. My work is grounded in documentary, exploring the inner beauty of everyday life through various lens based media. Notions of nostalgia and social commentary are present, but from a definite northern working class perspective. Instinctively I exploring the townscapes of North Wales and the North West, often producing work that reflects the every day minutiae of life. View more posts